Marketing of Women In Movies, Not Quite Pitch Perfect

Posted on September 17, 2013 by subject2interpretation 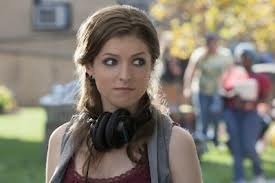 This is kind of a ramble, and a bit of a rant.  You’ve been warned.

I really like the movie Pitch Perfect.  Go ahead and judge if you must, but it is hilarious, witty and has a message.  I saw it on DVD long after it was released.  I don’t really remember hearing much about it when it was in the theatres, but based on what I did see in the advertisements, I assumed it was another mindless teen/young adult movie where the stars of the film are boobs and booze.   I also remember vaguely wondering if the movie was appropriate for young teens.

Well, my teen children saw it without me, loved it, and asked for it for Christmas. Someone gave it to them and that’s when I watched it.  I had no choice, really.

I was pleasantly surprised.   The college women in the movie were not dumb and they were not chasing boys.    They were The Barton Bellas, an all female a cappella group whose goal  was to beat the heavily favored and reigning champion men in a national a cappella competition.   The women actually took an oath not to hook up with the male competition.

The main character is Beca, an “alt-girl” who really wants to be a D.J.   She writes beats and mixes on her Mac and volunteers at the student radio station, hoping to get air play.   In other words, her dream is to  succeed in a tech, heavily male dominated, industry. 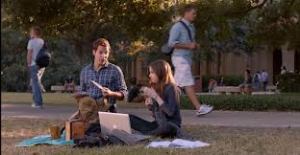 There is also a sub-plot about a male character whose dream is to score movies.  He introduces Beca to the power of the perfect soundtrack. 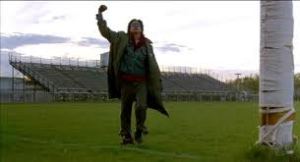 If you haven’t seen the movie, and assumed that it has to be garbage, or the dreaded “chic flick”  (don’t get me started)  I suggest a reason why.

Here is the movie poster for Pitch Perfect: 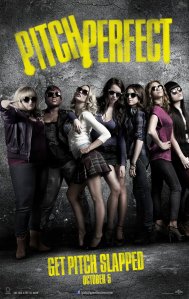 Nowhere in the movie do the women appear like this.   For much of the movie they look like “Flight attendants,” which was their traditional performance costume. 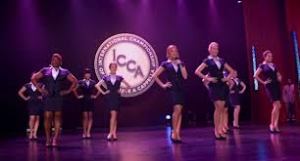 The Barton Bellas in Pitch Perfect

When they shed their traditional costumes and express their individuality, they perform like this: 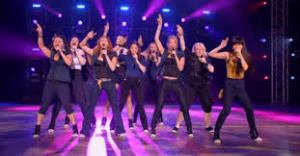 Bellas, after they decided to shake it up and try something new.

For much of the film, the characters are in street clothes and look like this: 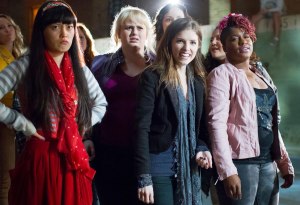 Barton Bellas in the Sing-Off

Take a look again at the movie poster.

The hot blonde in the middle with the Victoria’s Secret arched back, mini-skirt, heels, and pout, is Aubrey, the character that has no love interest whatsoever in the whole movie.   When we first see her, she looks like this: 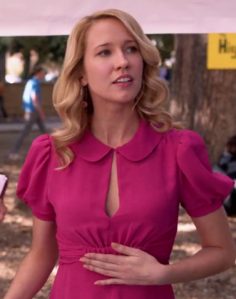 And she has an unfortunate scene when she looks like this: 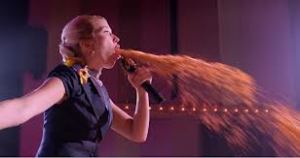 But she never looks or stands anything like how she’s portrayed in the movie poster.

Perhaps she should call her chiropractor.

There is one over-sexed character.  Stacie is the source of much comedy, though she never has any sex on-screen.  This is how she first appears: 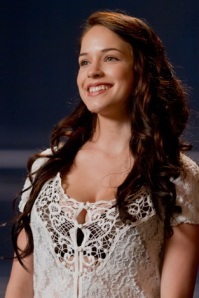 And when she admits that she has “a lot of sex,”  she looks like this: 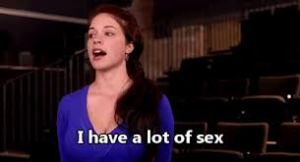 I would love to watch Pitch Perfect again just to research this post but I’m going to work from memory.   Back to the movie poster.  All the women are wearing sunglasses.   Let me think, I only recall the Bellas performing outside in the daytime once and they did so in their conservative flight attendant-like uniforms.   They did not wear sunglasses. What’s up with the sunglasses in the poster?  Is it just to remove the eyes — the windows to the soul — of the women, so that the focus is on their bodies as a group rather than their individual personalities?   Or maybe it just looked cool.  Why?

And the hair?  For most of the movie the women have their hair at least partially pulled back.  The flowing tresses depicted in the movie poster don’t really happen, not like in the poster.

Why were the Barton Bellas packaged like this for marketing?  Why?   I mean, aca-cuse me?  What’s up with that?  Was it to entice boys and men to watch a movie with female leads?   It is men who make this decision?  If so, do the men have self-hate issues? 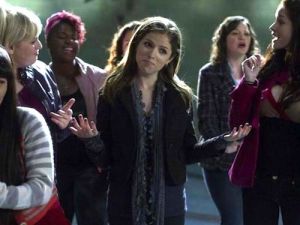 I wish someone had looked at this proposed poster, DVD, and soundtrack packaging and said, “Dude, no.” 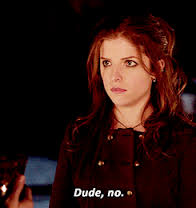 (You had to have seen the movie to get those last few quotes.  If you haven’t seen it, this is  kind of aca-awkward.)